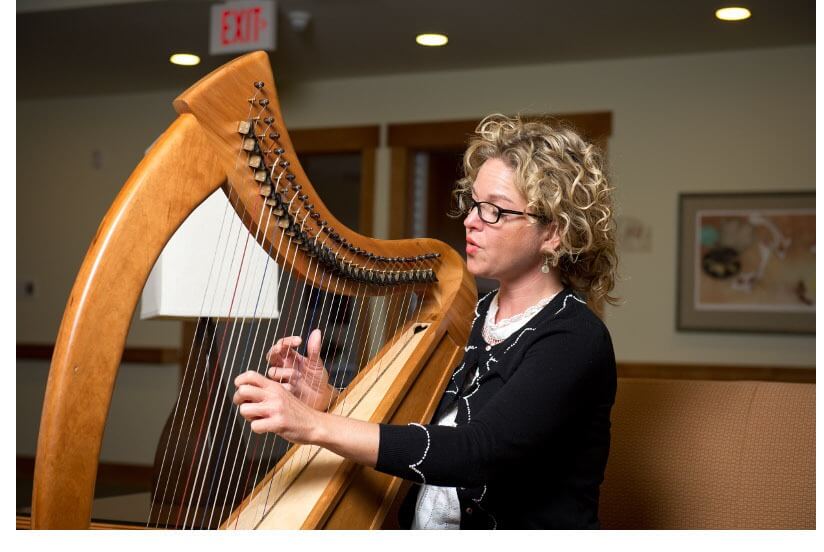 As a Music Therapist relatively new to hospice care, I am truly enjoying the unique experiences I have on a daily basis. Music can comfort us, it can motivate us, assist with pain management, and open the door to reflection or communication. Music can impact many stages of life, e.g. the music of childhood days, the music played as we came of age, and the many memorable events to which a song can take us. But, “What exactly do you do?” is the question I hear most often, and the one that I will never grow tired of answering. I hope the following examples provide enlightenment into the world of Hospice Music Therapy.

One day, I knocked on the door and met Mr. Smith, who was sitting in a chair looking out the window. I introduced myself. He immediately began to speak of his country music background and his love of Hank Williams. I picked up my guitar and sang several popular country songs of the 40’s and 50’s. He laughed out loud, surprised that a “young gal would know all that old stuff.” We reflected together as he spoke of family, friends, and the good times this music brought back to him. At the end of our first session he said, “You know, I used to sing, and I always wanted to make a record.” At our next meeting, Mr. Smith was surprised when I requested that he join me in some vocal warm-ups and breathing exercises in preparation for his first recording session. After practicing his favorite Hank Williams song several times, and with much encouragement, we were finished. He had successfully recorded “You’re Cheatin Heart.” As he listened to the recording, he became tearful and expressed his excitement at being able to share this with his family. He was so proud of his accomplishment. I returned two days later to deliver the CD. His family was surrounding his bed, and Mr. Smith was actively passing and unable to communicate. I suggested that the family listen to his newly-recorded Hank Williams song. They quietly listened. The recording of his soft singing voice filled the room at a time when he could no longer speak. He comforted them with his song and left a priceless gift.

On another occasion I was privileged to sing a patient’s favorite song with her daughter, a phone on her pillow as her daughter sang from another state. I have been honored to play hymns on a harp through a thundering storm while a patient was actively passing with the family at the bedside. I felt rewarded the day I was able to comfort a confused patient with the reassurance of her wedding song. Always, a song that opened up a small door of communication with her spouse who was constantly at her side.

Hospice Music Therapy has given a voice to many and brought comfort to not only the patient but also the family members who commit so much of their time, love and patience during this transition.
In my 15 years of clinical work, I have come to identify music therapy not as my career, but as my vocation.

To learn more about Music Therapy from Emmanuel Hospice, call 616.719.0919 or fill out our contact form here.